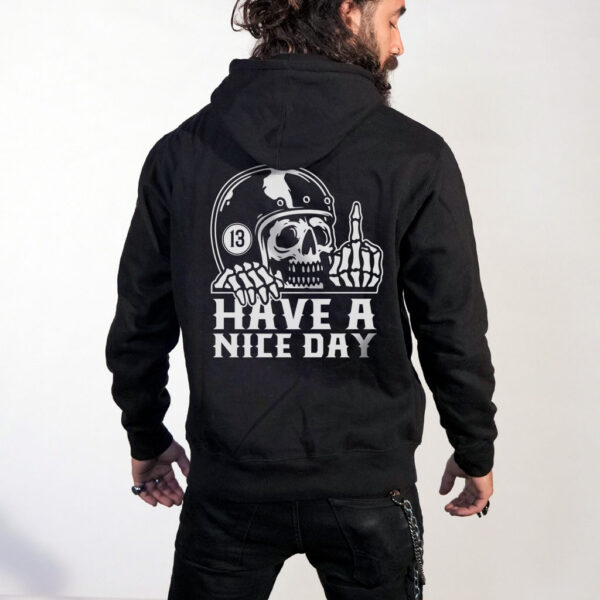 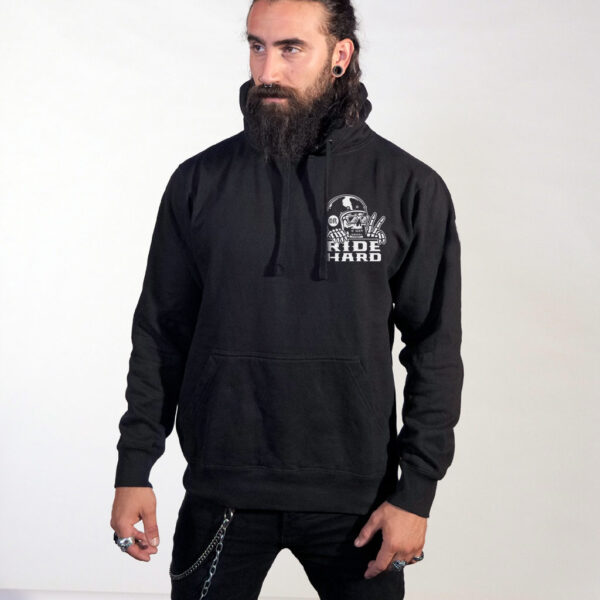 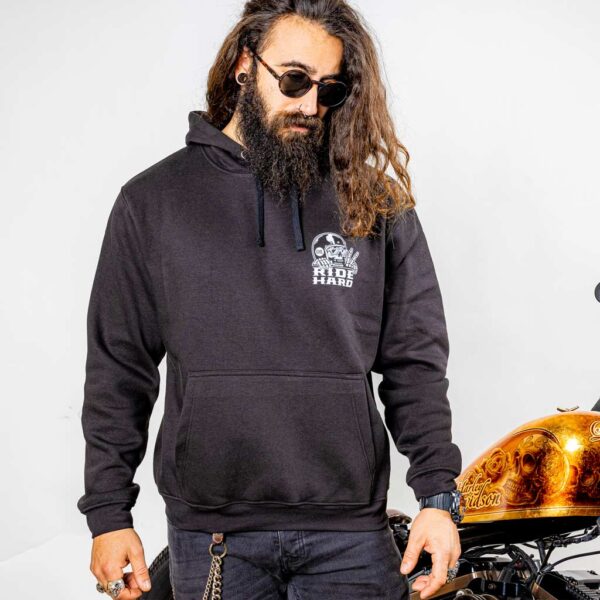 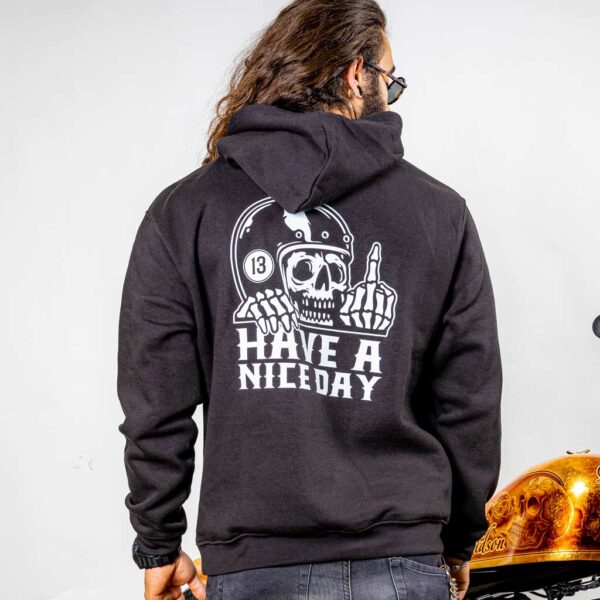 The Death Rider “Ride Hard” hoodie is a soft, warm and comfortable piece that is perfect for every biker. It’s equipped with a front pocket and an adjustable hood with drawstrings. The highlight of this hoodie is certainly the illustration, which is different on each side.

The Death Rider “Ride Hard” hoodie is the perfect piece for winter for those looking for something comfortable, durable and with a design that won’t go unnoticed. It is ideal for those days on the two wheels where a classic long-sleeved shirt is not enough for the cold. Its fit makes it perfect for those looking for a comfy look, but it will also suit anybody. The perfect match? Pair the hoodie with jeans and sneakers for a simple but effective look.

The Death Rider “Ride Hard” hoodie has a double logo. The front shows a skull with two fingers raised in the classic victory gesture. This is accompanied by the words “Ride Hard”. The logo on the other side occupies the entire back. Here, the skull shows the middle finger, together with the words “Have a nice day”.

The inspiration for the front logo dates back to the Hundred Years’ War. It was on this occasion, in fact, that the gesture of greeting with two raised fingers originated. By that time, the French army used to cut off the index and middle fingers of the English soldiers they captured. They did this because the English were very skilled archers, and by amputating the two fingers off their hands, they could no longer bow the arch.

The V-shaped fingers were also a signature gesture, many centuries later, of the famous motorcyclist Barry Sheene, particularly when he showed the raised fingers to his rival Kenny Roberts during their epic race at Silverstone in 1979. The gesture is still known as a symbol of the heated rivalry between the two and is remembered today by all fans of Barry Sheene and MotoGP.

Most people nowadays know the V gesture as a symbol of victory. Very few are aware of the irreverent meaning and history behind it that is used on the “Ride Hard” hoodie. Thanks to the design and the snug fit, this piece flatters every physique while remaining a bit lose.

Materials and composition of the Death Rider “Ride Hard” hoodie

The Death Rider “Ride Hard” hoodie is made of high-quality 100% organic cotton. Organic cotton is a fabric that lasts over time, excellent in both summer and winter because it promotes thermoregulation. Even during the coldest days, it will offer a sensation of warmth. It is a great fabric to face the winter since it helps regulate the body temperature.

The Death Rider “Ride Hard” hoodie is a quality product that will resist many washes. However, it is good to take some precautions. We suggest only washing it at low temperatures, preferably with cold water. In addition, we recommend not washing it with light-colour clothes to avoid colour transfer. The hoodie can be ironed, but it is better to avoid direct contact with the iron with the print. 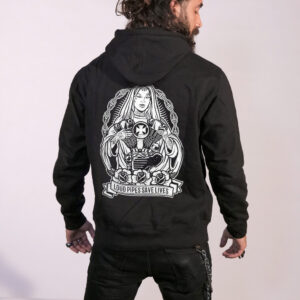 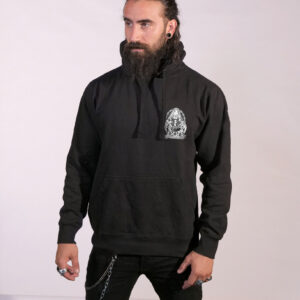 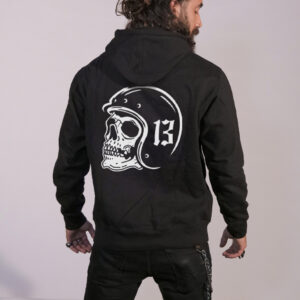 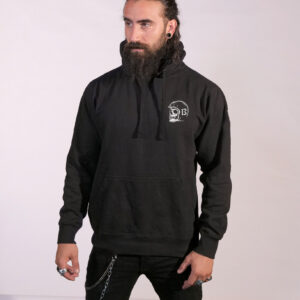 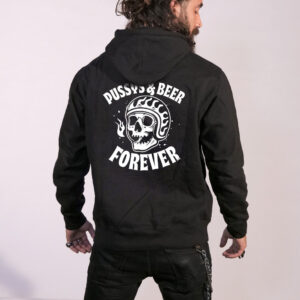 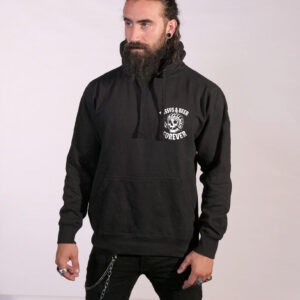 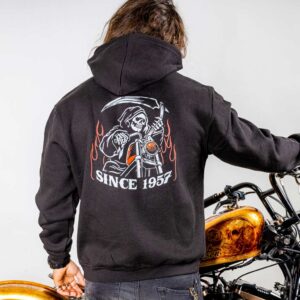 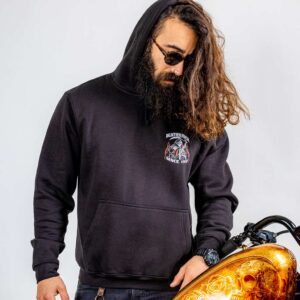 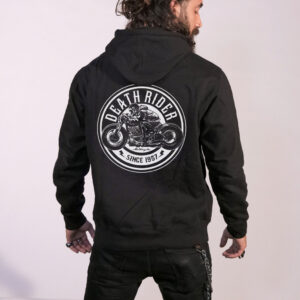 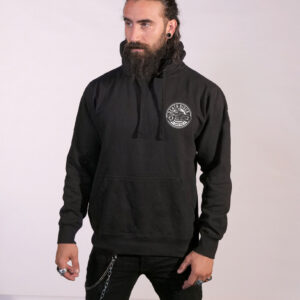 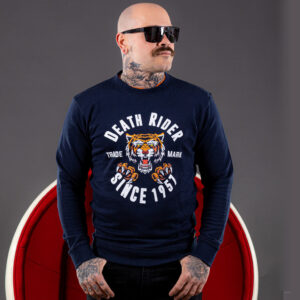 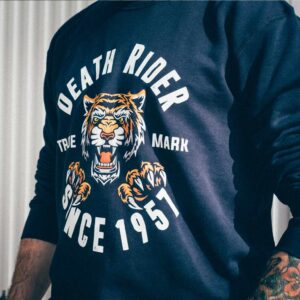 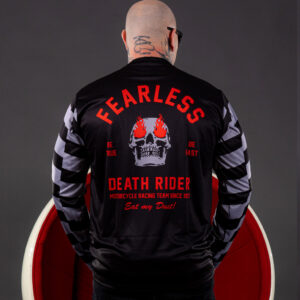 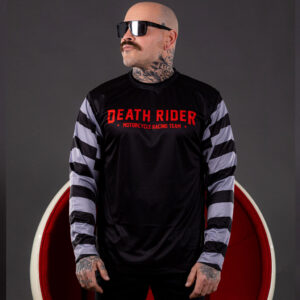 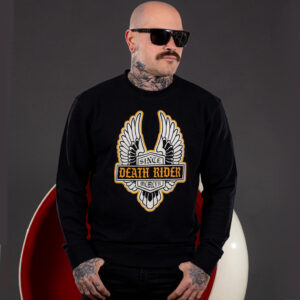