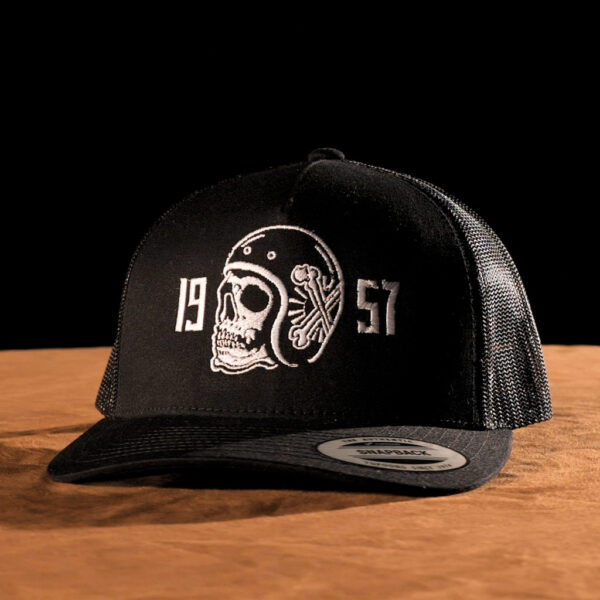 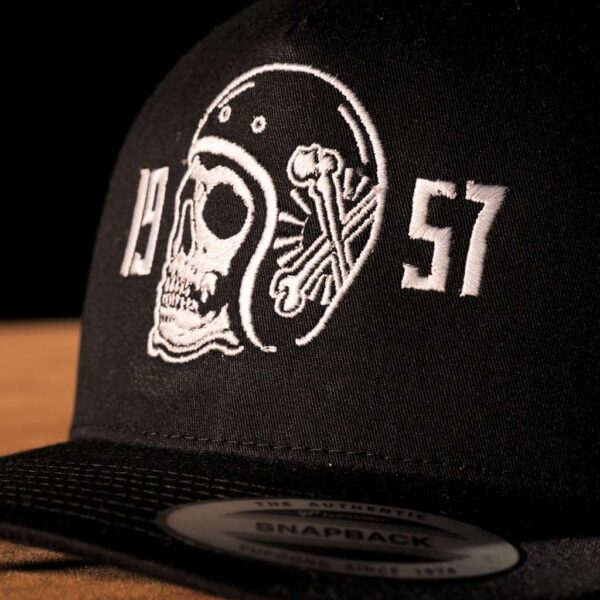 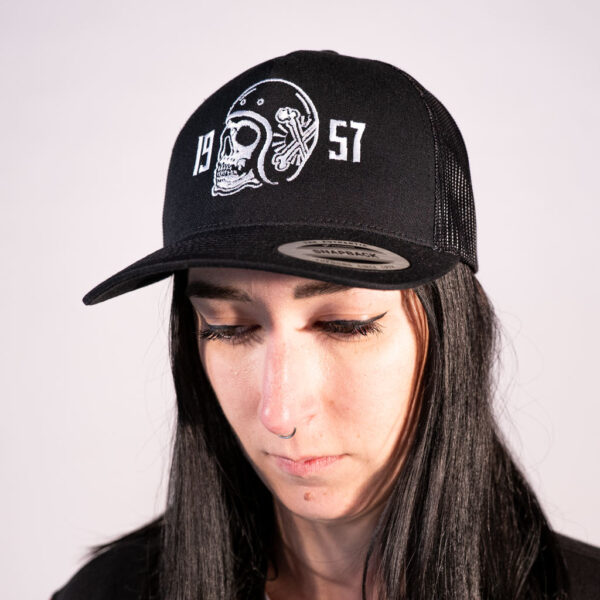 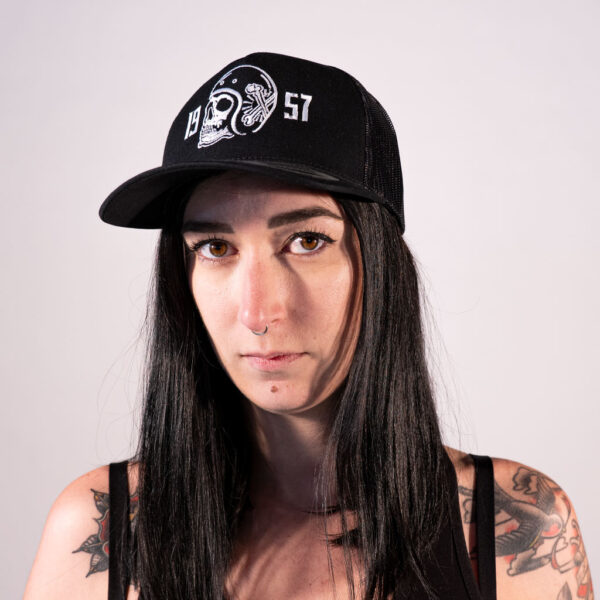 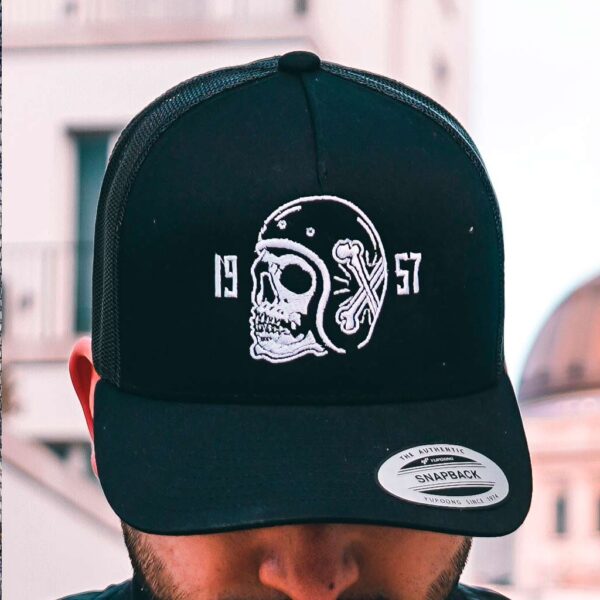 It’s a matter of facts. the Death Rider Trucker Cap with logo rocks. And we want you to put our coolest logo on your head!
People have been worshipping skulls for thousands of years, long before the invention of motorbikes. Skulls have been portrayed in paintings, described in ancient texts and numerous archaeological excavations show that tribes often used skulls in rituals. A skull undoubtedly conveys death, mortality and decay, which can be seen through the image of a skull and crossbones as an indicator of dangerous substances. Furthermore, a skull indicates a threat. Therefore, pirates looters and pillagers often put it on their flags and banners.

Today, skulls can frequently be seen on motorbikes and their riders. We adopted it in our Death Rider Skull Logo on the Trucker cap In general, bikers don’t want to hurt anyone. They just want to hang out with their friends and ride their horses of steel. So why do they keep the sign of death so close if they absolutely don’t want to die in the saddle or cause harm to others? It turns out that a skull is not only death and danger. As much as we all strive to be safe on our motorcycles, it seems ironic that skull symbolism is so dominant in motorcycling. But It also has a positive meaning. Let’s find out why bikers love skull items and what they mean.

Meaning of the Skull

A skull is a multifaceted symbol and each individual may have their own interpretation for it. Along with this, there are some common meanings that are widely recognised among motorcyclists. Here you’ll find some popular explanations for the symbolism of the motorcyclist’s skull as we recover in our Death Rider Trucker Cap.

For many people, skulls and bones signify mortality and, to a certain extent, they are not wrong. However, in reality, skulls have an opposite meaning, namely immortality. Indeed, after death, when the flesh decomposes, the only thing left after us is our skeleton, a silent witness to our life on this Earth. As a symbol of the cycle of life, rebirth and the afterlife, a skull was widespread among ancient cultures such as the Aztecs and Egyptians. Our ancestors often used fragments of skulls and bones to create jewellery and ritual objects.Thus, wearing a skull became a testimony to the love of dying relatives and faith in life after death. Moreover, a person who accepts a skull into his life through jewellery or clothing wants to declare how much he loves life and the rebirth and new beginning that lie ahead.

During the Elizabethan period (1558-1603), Death’s Head sounds or objects with a jawless skull reflected belonging to the underworld. This meaning was taken as a basis by a variety of militant groups such as outlaw motorbike gangs and gun clubs to develop their own ‘branded’ symbolism. For members of such clubs, skull objects are not only a sign of disobedience but also a powerful symbol of courage and endurance of body and spirit. Hard-core cyclists shake off this jewellery to show how serious and fearless they are in the face of any danger. Many men flaunt skull rings as a testament to their masculinity, machismo and indomitable spirit.

No one can escape destiny

A skull is a visual acknowledgement of destiny. Riding a motorbike is a constant risk, no matter how skilled you are with it. A skull ring on your finger reminds you that you can’t hide from destiny, you can’t cheat it or corrupt it. Death and life are bound together and cannot exist without each other. Everything has its beginning and its end. Sooner or later, death will take each of us with it and we must remember that. To a certain extent, skull jewellery is a reminder that we are mortal.

Indeed, we cannot escape death, but we can delay its arrival. Driving safely is important, but you may need something more powerful than obeying traffic laws to keep the Grim Reaper away. According to belief, skull jewellery is an excellent protection against death. Coming to a dying person leaves a skull mark. Those who already have this mark are protected against death because it will not come twice. Therefore, motorcyclists show that they are not afraid of death, but it is still too early to go to the other side.

Death rider Trucker cap: We are equal in the face of death

No matter who you were in this life, rich or poor, a big fish or no one at all, in the face of death, we are all equal. Grim Reaper makes us all equal. This overlaps with the ideology of motorcyclists themselves, who accept everyone into their ranks, regardless of what they do in civilian life. In a motorbike club, despite the hierarchy, all members are equal and all have the right to vote.

Devotion to your brother

The symbolism of the skull, especially if it is part of the motorbike club colours, shows your loyalty to your comrades. When looking at the skull patch or ring, you should always remember that you are a member of the pack and act according to its laws. In general, it is a symbol of brotherhood, teamwork and dedication to everything that personifies the biker culture. 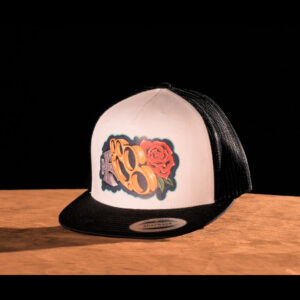 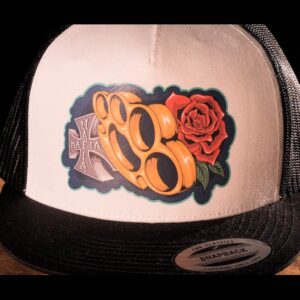 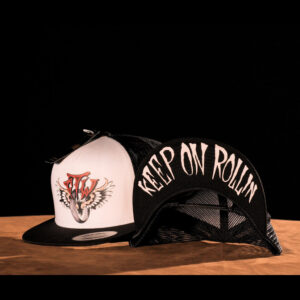 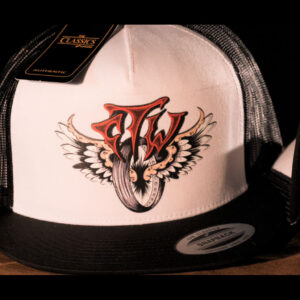 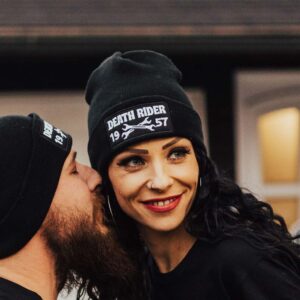 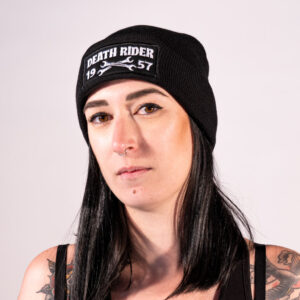 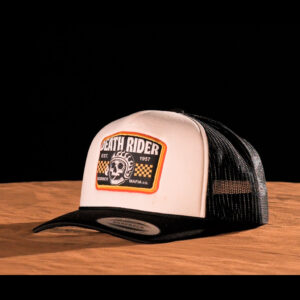 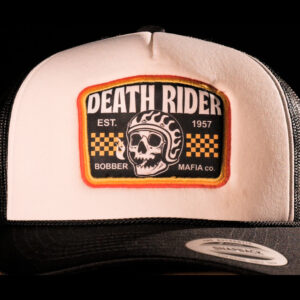